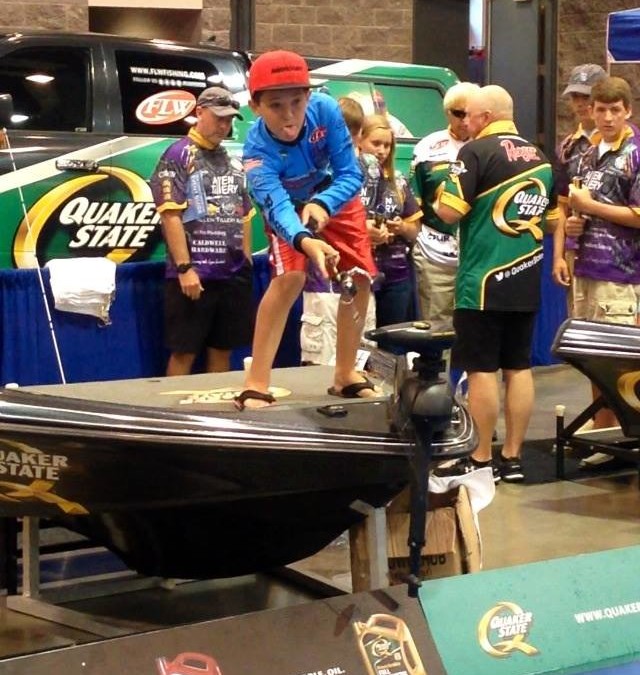 Fishermen are known to stretch and exaggerate a detail or two for the sake of a good story; however, to say that Remington Barkley’s devotion for the sport started early is actually an understatement. “Birth,” said Dean Barkley, the father of the 11-year-old Hartland Township boy. “I have a photo of my wife with a backpack. She was pregnant at the time with him and it was taken in Canada when we were fishing. … “It’s just something he’s always grown up around,” Dean Barkley added. “It’s simply his passion.”

It’s also something that is netting Remington growing attention.

The Junior World Championship will be held over two days on Lake Hamilton in Hot Springs, Arkansas, in conjunction with the Fishing League Worldwide’s Forrest World Cup bass tournament for adults.

The junior event is open to those between the ages of 11-15 and will include 45 representatives from the United States and three representatives from Canada. All 48 anglers will fish the first day or the tournament, with only the remaining top 20 invited to return for the second day of the contest.

The rules for the world event are the same as those Remington experienced in the state tournament.

Remington was able to fish from 7 a.m. to 2 p.m. in the state event. He was allowed to catch as many fish as he wanted during that time, but he could only keep five fish in the boat at any one time. So, if he was at his five-fish limit and caught a sixth fish that was heavier than what he already had, he had the option of releasing a smaller one.

Remington Barkley of Hartland can catch bass better than most, not even taking into account that he’s only 11. (Photo: Gillis Benedict/Livingston Daily)

His ranking in the tournament was judged on the weight of the five fish Remington returned with at the end of the event.

“We did some research and found that 10 pounds or thereabout has always won the (state) tournament,” Dean Barkley said.

With several hours still left to go in the event, Remington had five fish in the boat that came in at a total of 10.11 pounds.

Remington was determined to keep fishing until the very end; however, when he was reeling in his latest catch, the hook popped out of the mouth of the bass and the sinker at the end of the line flew out of the water and knocked him in the ear.

With every ounce making a difference, Remington was determined to keep going despite the pain.

“I just thought I had a chance to win,” Remington explained.

“We told him, ‘You’ve got to keep pushing yourself. You could be within ounces of winning this,’ ” he father added. “We convinced him to get back up.”

Over the next two hours, Remington caught five more bass. When the tournament finally ended, his final five-fish catch weighed in at 10.31 pounds, topping the second-place angler who brought in 10.23 pounds of bass.

“He beat a kid who was the three-time state champ,” Dean Barkley said.

Since Remington turned 11 just a few weeks prior to the state tournament, it was the first time he was eligible to compete in the event; however, his immediate success has not gone unnoticed.

The Michigan-based Case Plastics is one of Remington’s sponsors and is in the process of manufacturing a bait and custom coloring name after him. Remington also is a pro staffer for Fishing Complete Inc., which includes Case Plastics.

Remington’s mother, Gloria Barkley, said the opportunities open to her son will allow him to introduce the sport of bass fishing to a whole new audience.

“He’s able to reach, I think, a totally different generation,” she said.

Plus, even though he’s only entering the fifth grade at Farms Intermediate School in Hartland Township, Remington has already been invited to join the bass fishing team at Hartland High School.

Yet Remington carries all of the accolades and attention with a quiet and humble demeanor. He said his hopes are to finish somewhere between fifth place and 10th place in the upcoming world championship. Further queries are greeted with a simple shrug of the shoulders.

Perhaps there’s something about the silence, solitude and simplicity Remington finds in the sport that would make further discussion too intrusive.

It’s not a job, chore or burden for him.

Instead, it’s almost an extension of himself, which is why he can be found during most of his free time fishing off the dock or from a rock or in a small yellow kayak in the man-made pond behind the family’s home.

“I think it’s just his natural skill,” Gloria Barkley said. “I think it just naturally comes to him.”

“Come out here at 7 o’clock in the morning, and you’ll see him out here fishing in his underwear and pajamas,” Dean Barkley added with a laugh. 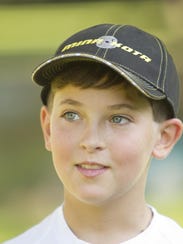 Don’t let those innocent eyes fool you; Remington Barkley is a shark when it comes to fishing. (Photo: Gillis Benedict/Livingston Daily)

You can connect with Remington Barkley at facebook.com/RemingtonBarkley or meet him in January at the Novi Fishing Expo, where plans are in the works to have him as a guest speaker and in-booth personality for Fishing Complete Inc.